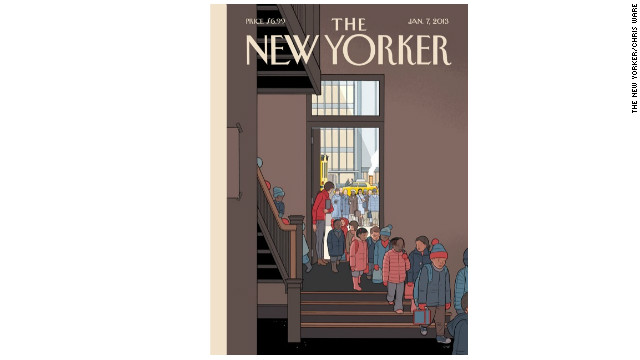 The gun control debate continues to spread across media and news outlets this week as Biden meets with advocates on both sides of the issue, and pundits sound off on constitutional rights and executive power. But, here are some of the other stories the Reliable Sources team is reading this week:

Writing about yourself – Katie Riophe has some pointers for aspiring memoirists in Slate: 1) Be honest and turn a critical eye on yourself, 2) While also entertaining the reader, 3) But don’t forget to follow the same guidelines as you would in fiction. Craft your storyline with care and remember that not every detail matters.

The New Yorker covers the news – Covers of The New Yorker often have a way of distilling the news into one image that captures the essence of a story. The January 4th cover is graphic novelist Chris Ware’s follow-up to his back to school cover from September 17th 2012. It captures how the elementary school shooting at Sandy Hook has called into question the safety of our schools.

BBC Presenter Takes Ill – Andrew Marr, one of the BBC’s most well-known journalists is recovering in the hospital following a stroke. His two programs, “The Andrew Marr Show” and “Radio 4’s Start The Week” will continue to be broadcast with guest hosts through the weekend.

Keeping tabs on the White House – Washigntonian magazine’s recent profile on CBS’s Mark Knoller reveals that the long-time journalist knows so much about the President’s schedule that even White House staffers go to him for statistics. Everything from how many speeches President Obama has made (1,818), how many times he’s used a teleprompter (689), to how many rounds of golf he’s played (106).