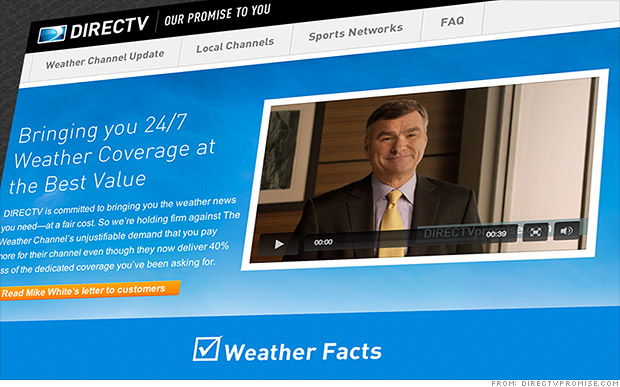 Nearly two weeks into the DirecTV blackout of the Weather Channel, it looks like there's no end in sight.

On Friday, DirecTV Chief Executive Mike White published a letter online blasting television channels for acting like "it's their absolute birthright to be paid more and more each year for the same content they offer, regardless of how many customers actually watch their channels."

White didn't stop there. He asserted that the Weather Channel's total audience has been declining as consumers gravitate to the Web.

"Why should DirecTV customers pay more for a channel they are watching far less?" he wrote.

White's letter was unusual. Television channel owners and distributors usually haggle in private and come up with carriage agreements that both sides can live with.

The dispute between the Weather Channel and DirecTV underscores how contentious the negotiations can become.

White asserted in his letter that DirecTV believes the channel is only worth "one-quarter" of the price the channel wants.

The more drastic reduction that White described in his letter is basically unheard of in the television business.

But White's stated logic may appeal to many of his customers: "In every other industry, when the demand for any product is reduced, prices go down, they don't go up. That is the heart of this issue."

In response, Weather Channel spokeswoman Shirley Powell said that DirecTV's decision to drop the channel "has nothing to do with keeping costs down for consumers." She noted that DirecTV recently said it would raise its prices by 4.4% on average.

For his part, White conceded that DirecTV was raising its prices along with other TV providers like Comcast, Dish and Time Warner Cable. But he blamed the content providers.

"[W]e are forced to raise our prices annually due to programmers like the Weather Channel, demanding to be paid more and more each year," he wrote. He said DirecTV "will be forced" to pay 8% more for programming in 2014 and that it was passing on to its customers only a 3.7% increase.

White's letter sent a message to DirecTV customers: Don't switch to another provider, because channels like the Weather Channel are forcing them to raise rates, too.

DirecTV provides television service to about 20 million homes, totaling roughly one in six households in the United States. Before the dispute with the Weather Channel, DirecTV introduced an upstart channel, WeatherNation, as an alternative.

White admitted in Friday's letter that WeatherNation is not an "exact substitute" - far from it - but said it "offers our customers what they want at a fraction of the price."

One of White's main points is the same one that outside analysts have pushed: The television version of the Weather Channel is being cannibalized by the parent company's Web sites and apps. The channel's Weather.com is one of the preeminent sources for online weather information.

"Our customers tell us the Weather Channel is their fourth choice when looking to access weather information," White said. "They first turn to mobile devices and computers for instant weather information and then to local news sources that have a better grasp on local conditions."

Last week, on CNN's "Reliable Sources," I asked Weather Channel meteorologist Jim Cantore if the channel's apps were pulling people away from TV.

"Here's my analogy," he said. "If your knee is starting to ail a little bit, you may go online and see what the symptoms may be. But at the end of the day, you're going to the doctor to find out what's going on with that." The flagship television channel, he said, is the doctor.

But the back-and-forth between the Weather Channel and DirecTV suggests that DirecTV subscribers won't be seeing that doctor anytime soon.