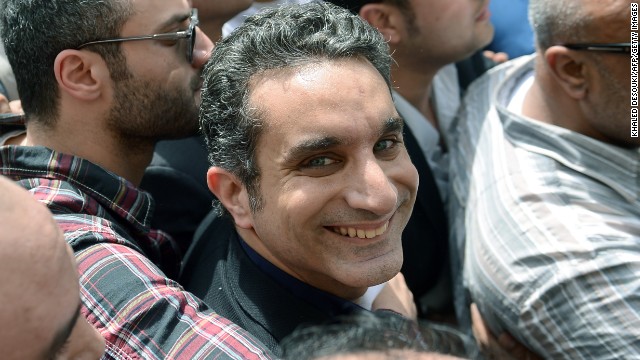 Jay Leno is leaving the historic Tonight show, Roger Ebert has passed away after a long battle with cancer and the media's obsession with Hilary's supposed 2016 run has hit an all-time high. If that's not enough news for you, though, take a look at what the Reliable Sources staff is reading this week:

Social media slight: Jon Stewart's political tirades are both long and legendary, so it's no surprise that he dedicated an entire 10-minute segment of one of his shows to mocking Egyptian President Morsi after the Egyptian leader arrested Stewart's Middle-Eastern comedic counterpart, Bassem Youssef (seen in the picture above).  The diatribe might have ended there, if not for one worker at the U.S. Embassy in Cairo, who decided to send out a link to Stewart's segment via the U.S. Embassy's Twitter account. Morsi's office quickly complained via its own official Twitter feed, saying that "It's inappropriate for a diplomatic mission to engage in such negative political propaganda." In response, the U.S. Ambassador to Egypt Anne Patterson ordered that the embassy's Twitter be shut down, according to State Department officials.

Radio road trip:  While you might not have heard of Tim Westergren, we bet you've heard (and even listened to) his musical creation called Pandora. Westergren, founder of the online radio service, is currently knee-deep in a bitter battle with the music industry over the price Pandora pays for each song played on its radio, as compared to the lower costs per song that satellite and cable radio pay. But "when you’re Tim Westergren, and you’ve got more than 69 million active users listening to more than 1.5 billion of hours of music in a month and your product is embedded into the dashboard of 80 or so new car models, you don’t have to confine legislative lobbying to Washington (and political fund-raisers). Instead you go on the road, where his company forged an unusually intimate bond with its customers, hundreds of whom show up for each of his town halls," explains an article in The Washington Post.

Say Bye-bye to Bill: (Adair that is.) The Washington bureau chief for the Tampa Bay Times is reportedly trading in his pencils and notepads for textbooks and lecture halls. Adair, who has worked for the paper for more than 24 years, will be leaving for Duke University this summer to become the Knight Professor of the Practice of Journalism and Public Policy. While he will technically leave the paper, he says he'll continue to contribute to his Pulitzer prize winning fact-checking machine, Politifact.

The Time Warner of the streets: Founded originally as a free magazine by Shane Smith in the mid '90s, Vice media has evolved to a multi-platform news organization, known for its gonzo reporting style and in-your-face stories. Despite its avid fans, though, Vice has been unable to attract a wide audience... until now. With a new documentary series set to debut tomorrow on HBO, Vice's popularity is finally gaining traction in the mainstream media, and, according to Smith, can achieve the same scale [like CNN] by selling its content piecemeal to other companies—to YouTube, through its original-content program, and to TV channels."

So do you think Vice could become the next CNN? And what are you reading this week?